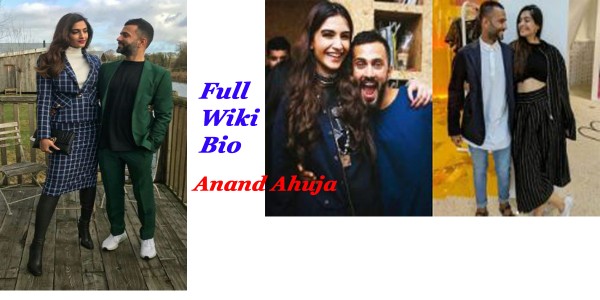 Anand Ahuja – Get Full Bio of Fashion Couple at No.1 Wiki.

There is a successful entrepreneur who is well known for being a husband of sexy style diva of Bollywood – Sonam Kapoor.

Don’t surprise! I say that because I am dam sure that you don’t know Anand Ahuja without Sonam Kapoor.

He is one of the very successful entrepreneur and well known for being an owner of India’s first multi-brand sneaker store VegNonVeg.

Anand Ahuja also runs one fashion label called Bhane, which is also a favourite store of all Bollywood stars. But he is well known for being a husband of Sonam Kapoor.

Anand was born on 29 July 1983 in New Delhi, he grew-up and lives in Delhi posh Jor Bagh locality.

His grandfather, Harish Ahuja runs one of the largest export house, Shahi Exports and now Anand is the managing director in that export house.

Anand Ahuja is a highly educated entrepreneur who did his schooling and college from The Wharton School in Philadelphia and the University of Pennsylvania in Philadelphia.

He is studying MBA, but somehow he couldn’t complete it and came back to India and start his own company under the guidance of his entrepreneurial family.

He also did lots of internships during his college days some of them are – Intern with Deutsche Bank and worked as Product Manager Intern at Amazon and as an Assistant Buyer at Macy’s.

On his return to India in 2012, he starts working in Development wing of Shahin Exports Pvt Ltd which is his grandfather and first business of their family.

After some time he founded a clothing brand in India called Bhane.

He loves sneakers and one of his hobbies is to collect sneakers which made him build India’s first multi-brand sneaker company VegNonVeg.

As we all know that Sonam Kapoor and Anand Ahuja tie in the knot of marriage last year.

They both are in a relationship for a while and they share regular pics together on social media.
Which are questions in everyone’s mind that how they meet and how their love story starts?

In an interview to Filmfare, Sonam revealed that “My friend was trying to set me with Anand’s best friend”.

Sonam said that When I meet Anand for the first time I am so busy with the promotions of Prem Ratan Dhan Payo (2015).

One evening when Sonam’s friends conned her to visit in a bar at the Taj.

According to Sonam on that day their friends call her to meet Anand’s best friend who wants to date Sonam Kapoor.

When Sonam reach their she meets Anand and his friend and after that meeting, she says that Anand’s best friend is reminded her about her brother Harsh Kapoor. So, she doesn’t like to date this guy.

In that interview, Sonam further added “No one would think of Anand and me together because Anand is totally different. He had no idea that Anil Kapoor was my father. I ended up speaking to Anand that whole evening. Anand was trying to get me to talk to his friend like being a middle man, but we ended up talking more”.

There is no surprise that Anand Ahuja had a crush on Sonam Kapoor.

According to Sonam after this meeting, Anand message me on Facebook at 2:30 am by saying that “Are you still single? Because if so then if you are ever in London, please connect with him”.

Sonam is like a school teacher in this matters and says don’t mess with me so late in the night, and if your friend is interested he should message me himself.

That’s how the conversation started between us on Facebook according to Sonam and after that, they became a friend in Insta, Watsapp and all different social media platform.

After a few weeks of Social Media friend, they became a close friend and began talking on the phone.

Two weeks later in one meeting, Sonam asked Anand that “Do you still want me to talk to your friend?” He said, “No, No! Not at all, I am keeping you for myself”.

Then what, both started sharing lots of pictures with each other, hanging out at different places, not just in India but aboard tour also.

After another few weeks, Anand Ahuja proposes Sonam Kapoor and Sonam reply that proposes after few months of waiting.

On 3rd May 2017, their relationship became national news when Sonam was found with her boyfriend Anand Ahuja at the 64th National Awards in New Delhi, to receive her first National Award for her performance in 2016 biopic movie “Neerja”.

Sonam and Anand got married in Mumbai on 8th May 2018. The stunning wedding pictures and videos got viral on social media.

Story Which Must Read

Some Interesting Facts about Anand Ahuja

No! if you believe in reports then he first met Sonam Kapoor in 2014 and he was introduced to her by her stylist Pernia Qureshi.

Anand proposed to her within a few weeks of meeting, which she accepted after a few months.

Ahuja is the owner of ‘Bhane’ & ‘VegNonVeg’ but mostly he is known for his Fashion Company (Bhane), which was based in New Delhi, India.