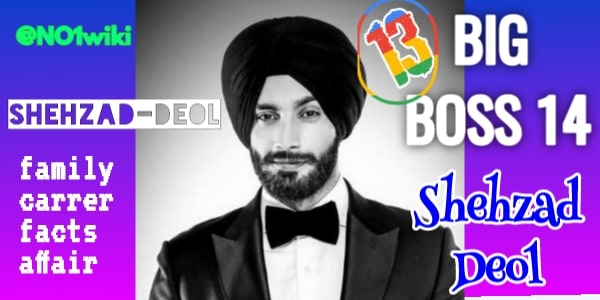 Shehzad Deol is an Indian actor and model mainly known for his TV works.

He gets his fame for his appearance in the TV reality shows named Ace of Space Season 1.

If you are interested in Bigg Boss, then this is a very interesting article for you.

Read this full bio carefully and you get some unknown facts about the Shehzad Deol.

Shehzad was born on 29th November 1996, he was born and brought up in a well Punjabi family from New Delhi, India.

After completing his studies he starts his work for the model.

He appeared in various modelling shows like Top Model India and Model Hunt Show where he secured the second place.

He gets a spot of light and gets full fame through his appearance in a TV reality show named Ace of Space Season 1 and he becomes a finalist in that show.

He also got some professional acting training from Kishore Namit acting school in Mumbai.

He got trained under choreographer Aadil to brush up his acting and dancing skills.

The root of his family is from Ludhiyana, Punjab, India and later their family shifted to New Delhi, India.

He is very close to his family and according to him his family always support him for his dreams.

The Career of Shezad Deol.

Shezad started his career as a model by participating in TV reality show like Top Model India and Model Hunt.

Some famous Bollywood actor like Sargun Mehta and Jimmy Shergil encourage him to try in modelling shows.

Soon after completing his graduation, Deol gives audition for modelling shows and got selected in the talent show “Top Model India”.

He also worked as an assistant director in the Punjabi movies like Shareek and Jindua.

In 2017, he appeared in Punjabi song named “Punjabi Mutiyaar” which become a big hit.

In 2018, he participating in MTV Ace Space Season 1 which hosted by Vikas Gupta and in that show he emerged to finalist.

Unfortunately, he did not win the show, but he got lots of popularity through that show.

In a very short time in this modelling and acting industry, he becomes so successful and ready to make his name big in this industry.

Now, he is focusing on his appearance in Bigg Boss 14 as a candidate.

Some Unknown facts about Shehzad Deol.

He caught drinking alcohol and smoke in private.

His childhoods dream is to be a model.

He worked as an assistant director in Punjabi films and also featured in the Punjabi music video.

Shehzad Deol is very particular about his fitness and hit the gym daily with routine.

He is a very big dog lover and has a dog with name Bullet Singh.

In 2019, Shehzad Deol was honoured as the Rising Star of the city Noida.