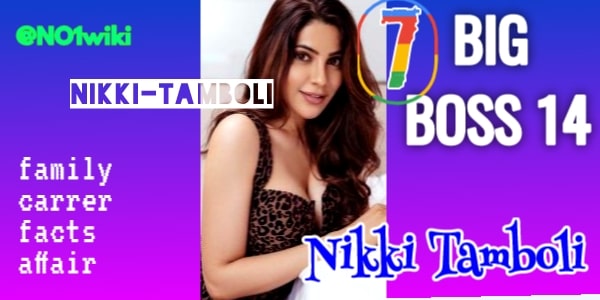 There is an actress who acted in lots of Tamil and Telugu films and now participating in Bigg Boss 14.

She has been seen in films like Kanchana 3 and Thippara Meesam.

If you are interested in Bigg Boss then this article is very interesting for you.

Read the full bio of Nikki Tamboli and get some facts related to Bigg Boss 14 below.

In one interview she said that she always wanted to make her career in modelling.

So, Nikki started her career as a model soon after her studies and start featured in a few TV commercials.

Later, Nikki went to make her film debut with “Chikati Gadilo Chithakotudu”, this is a Telugu film with actor Adith Arun.

After this, Nikki was seen in prominent films like Kanchana 3, and Thippara Meesam which was a great hit.

Recently, this actress took her social media and share some selfie where she is seen getting ready for her new show Bigg Boss 14.

Nikki’s fans are going to have a blast watching her in the Bigg Boss 14.

The career of Nikki Tamboli.

Nikki Tamboli is a beautiful and talented girl who started her career as a model.Who is working in the Tamil and Telugu film industry?

She also acted with popular actors of south Indian movies like Rajendran, Soori, and Manobala.

She has appeared in some well-known films like “Thippara Meesam” and “Kanchana 3”.

Her performance in many films makes her best female debut of 2019 in Telugu films.

She worked with some top names of the time and now she ready to make her appearance in Bigg Boss 14.

Some Unknown Facts of Nikki Tamboli.

Nikki Tamboli starts her career as a model and TV commercial actress and soon she gets a chance in south Indian movies.

Chikati Gadilo Chithakotudu is the first debut film of Nikki and after that, she also featured in Kanchana 3.

She also is known for her modelling career, and she is dating Mumbai’s famous DJ Rohit Gida.

The couple Rohit and Nikki usually spotted together by paparazzi.

Her main hobbies are music and dancing but she also loves to Read, Photography, travelling, internet surfing and to name a few.