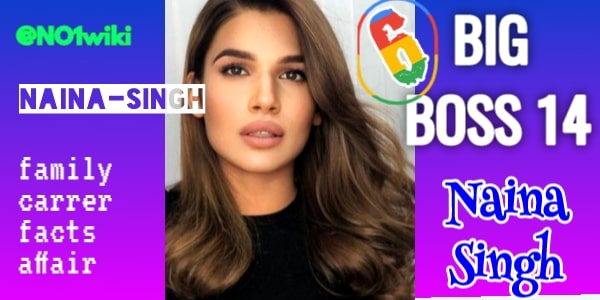 Naina Singh is an Indian model and television actress and she is now the candidate of Bigg Boss 14.

She also wins Splitsvilla 10 and participating in Bigg Boss 14.

If you are interested in Bigg Boss then this article is very interesting for you.

Singh is a state-level table tennis champion. Right from her school days till date she has played primarily all kinds of sport including cricket, football, basketball, volleyball.

She was an assistant casting director before she participated in Splitsvilla 10.

She is the winner of Splitsvilla 10 and also featured in lots of television shows.

The Career of Naina Singh.

In 2013, Naina has crowned Femina’s Most Stylish Diva, and she started her modelling career.

In 2017, she participated in MTV show Splitsvilla 10, where she finished as the winner of the show.

In 2018, she participated in Star Plus talent reality show India’s Next Superstars and emerged as a finalist.

In 2019, she played the role of Rhea Mehra in Zee Tv show “Kumkum Bhagya” and she started her television acting career.

In Feb 2020, she quit the show saying that “I couldn’t relate to Rhea at all. The kind of emotions she plays were not justified and I couldn’t play the part anymore”.

Now she is ready to become part of one of the most famous reality TV show in Colour’s TV named “Bigg Boss 14.”

Some Unknown Facts of Naina Singh.

She is an Indian model who participate in Indian Youth reality show – Splitsvilla 10.

She loves to party and hanging out with friends.

She is very fond of piercing & tattoos.