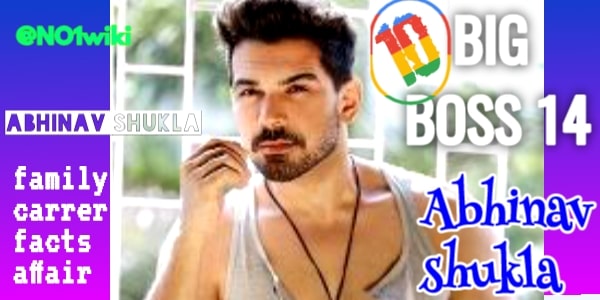 If you are a fan of a famous tv show Bigg Boss and want to know about our new contestents of Bigg Boss 14 then you are at the right place.

Read untill the end to get some unknown informations about Bigg Boss 14 candidate Abhinav Shukla.

Abhinav Shukla was born on 27 September 1982, in Ludhiana, Punjab.His father Dr. K. K. Shukla was an entomologist in Ludhiana at Punjab Agricultural University. His mother Mrs. Radha Shukla was a teacher at Guru Nanak Public School.

He has completed his studie in year 2000. He also did Bachelor of Technology in Electronics from Lala Lajpat Rai Institute in 2004.

In 2004 he has also participated in a technical festival and won the first prize.

The Career of Abhinav Shukla

Abhinav Shukla put his first step in television with Jersey no. 10. But later he left and went on to work in some honorable roles in Geet, Ek Hazaaron Mein Meri Behna Hai, Jaane Kya Baat Hui.

In Survivor India, Season 1 he was one of the best castaways at 22nd position and also reached up to the final five. He also knows to play Cameo and played it on Zee TV’s show Badalte Rishton Ki Daastan.

In 2008, Abhinav Shukla did his first serial at Colors TV Jaane Kya Baat Hui, and in 2009 he did very hit ZeeTV show Chooti Bahu-Sindoor Bin Shuhagan.

Also, he played side roles in some star plus serials like Ek Hazaaron Mein Meri Behna Hai in the year 2011 and Diya Aur Bati Hum in the year 2006.

He has also acted in so many hindi Bollywood films like Jai Ho, Roar:Tigers of Sunderban, Aksar 2 snd Luka Chuppi.

Some unknown facts of Abhinav Shukla

He won the “Best Design Award” at the Tryst-2004 which is organized by Indian Institute of Technology, Delhi.

He started his acting career in year 2007 by playing role of Arjun Rai in Jersey No. 10 at Sab TV.

He is also an sports Junkie.

Don’t Know, He never seen with alcohol or smoke in public.