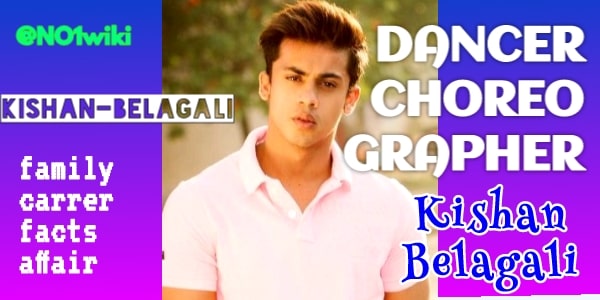 Kishan Belagali is an Indian dancer, Choreographer, and Television personality.

We well know him for Dance Deewane Season 1.

But he gets spotlight due to his participation in Bigg Boss Kannada 7.

If you are interested in dancing and follows these reality shows then you are in the right place.

He was born in Chikmagalur.

Then he went to Bangalore for completing his higher studies.

After graduation, Kishan enrolled at the Shiamak Davar Dance Academy as an instructor.

To showcase his dancing skill, he had taken part in Dance Deewane Season 1 and Also Kishan became a contestant of Bigg Boss Kannada 7.

The career of Kishan Belagali.

Kishan got a huge fan following after it. Also, he got a respected tag of “The Youth Winner” by the Dance Deewane show.

His late mother always wanted to see him as an outstanding dancer and her this desire was fulfilled by the year 2018 when he had taken part in the Kannad Dance reality show titled Takadhimitha.

When he was 8 years old, his mother gave him the inspiration to join and attach to the world of Dance.

Hence, she sent him for coaching. But at that time, Kishen hated to went to the dance classes.

It was not only enough, furthermore over 4+ dance classes and so rejected him he usually changes his Dance Coaching Classes.

But for the fifth time when he went to Shiamak Davar’s Dance Academy, he liked the new place and got attached to it.

In the year 2019, Kishan had also taken part in Kannad Bigg Boss 7.

Kishan Belagali likes to lives in a joint family.

He is the youngest child of the family.

He started dancing only at the age of 8 years.

He is also an instructor of an academy and trained hundreds of students.

Kishan Belagali is an Indian dancer, Choreographer, and Television personality.

Mainly Kishan Belagali is famous because of a T.V. series Dance Deewane in the year 2018.

No, he is unmarried.