NO.1 WIKI World’s NO. 1 Wiki Platform Now, nothing will be secret.
Home ACTRESS Zareen Khan – Hottest Actress of the film industry – Full Bio... 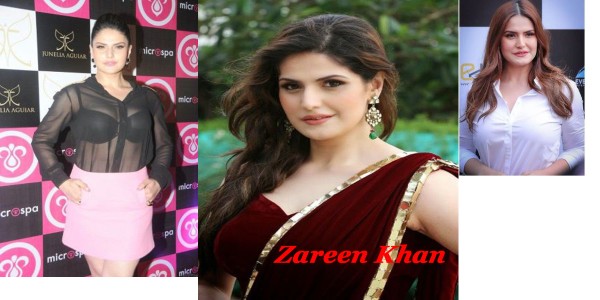 Today we talk about one of the hot actress of bollywood named Zareen Khan.

She is an Indian actress and model mainly known for her roles in Hindi Film industry.

Zareen Khan made her debut in Bollywood as a co-actress of Salman Khan in film Veer(2010).

For that film she selected as a Best Female Debut.

If you are interested in bio and wants to know the age, husband or affairs, physical stat and some fact then stick through this article until the end.

Zareen Khan was born on 14th May 1987 in Mumbai, into a Muslim Pathan or Afghan family.

Due her family culture she able to speak Hindi, Urdu, English and Marathi.

She makes her debut in the Bollywood from film Veer in 2010. She gets an award for that film but she does not get much fame as she deserves.

In film “Ready” Zareen recognized for her item number in song “Character Dheela”.

Zareen earn lots of success through the Bollywood film “Housefull 2”.

In recent year she did her debut in Tamil film “Naan Rajavaga Pogiren”, in which she didi an item number in song “Malgove”.

Zareen Khan not only work in Bollywood she also get lots of success in Punjabi Films.

She plays a lead role in Punjabi romantic movie named “Jatt James Bond”, and that gives her a lot of success in the Punjabi film industry.

In 2019 she debut with the action thriller film “Chanakya”.

More about her career as well as bio details is given below.

Khan’s acting career began when she was working for film “Yubraj”, on the set of Subhas Ghai’s film school. Salman Khan notice her and decided to cast her for his next film.

Zareen accept the offer of Salman Khan and play the role of Princess Yashodhara in film Veer (2010).

For that zareen have to gain 8 kgs in order to be more convincing role as a 19th century princess.

The Veer was based on Pindari Moment of Rajesthan, But film not done well in Box Office.

As she nominated for Zee Cine Award for Best Female Debut, but there are lots of critics that not give well fame to Zareen.

In 2011, Khan did an item number “Character Dheela” with Salman Khan and it was the highest-grossing Bollywood film in 2011, which give her lots of success.

In 2012 to 2013, Zareen walked on the ramp as a showstopper for jewellery brand YS18 at Indian International Jewellery Week (IIJW), 2012.

After that Khan releases her second Bollywood Film Housefull 2, that film was another successful film for her But Khan earned critical acclaim for her performance.

In 2013, Khan made her debut in Tamil film through “Naan Rajavaga Pogiren”, in which she did an item number in the song “Malgove”.

That film was her first role outside Bollywood.

In 2016, Khan did an item number in the film “Veerappan”, the same year, she also appeared in another item song named “Mahi Ve” in the film “Wajah Tum Ho”.

In 2019, she made her debut in Telugu film “Chanakya”. In the same year she appeared in Punjabi film “Daaka”, these both film also received mixed reviews for her.

Zareen Khan’s next film may be “Hum Bhi Akele Tum Bhi Akele” with Anshuman Jha, which revolve around the love story of two homosexuals and scheduled to release in 2020.

In 2017, she criticized the maker of the film ‘Aksar 2’ and alleged him for misleading her by the role of film.

They say to zareen that film would be an inoffensive film, but in midway, they change the theme of the film and asked her to do more exposing scenes.

On 6th December 2018, she filed a complaint against her former manager Anjali, for misbehaving and threatening her over money disputes.

On 12th December 2018, she met with a big accident in Goa when a 31-year-old biker, Nitesh Goral, crashed into her car from behind, subsequently, he died at the spot.