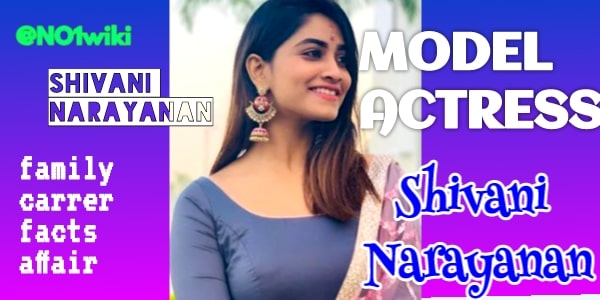 Shivani Narayanan is a Famous Indian model and actress who mainly works for Tamil serials.

If you are a fan of Bigg Boss Tamil, then you must have to read this article.

She got huge fan followings and a media spotlight after playing the role of Sneha in the superhit Tamil serial “Pagal Nilava”.

She was born in Manali, Tamil Nadu.

But now she lives in Chennai.

She did her schooling and graduated from Chennai.

She had a lot of desire of becoming an actress.

And the luck was with her because she got modeling projects when she was of fourteen years.

The career of Shivani Narayanan

Shivani is very serious about her acting career as she wants to make this her lifelong career.

She started her modeling career at the age of 14 only.

The first time she had started her career modeling for Jewellery print shoots and advertisements.

She became famous when she made a TV serial debut, “Saravanan Meenatchi Season 3”.

She earned a lot of love and respect from fans when she played the role of Sneha in “Pagal Nilavu”.

She also got a chance of being a contestant in Vijay TV’s “Jodi fun unlimited”.

She also became a lovable part of so many Tamil TV serials like “KadaiKutty Singam”, “Rettai Roja”.

Some unknown facts about Shivani Narayanan :

Shivani is a very pampered child because she is a single child of her parents.

She was born in a middle-class family.

Shivani loves dogs and her own dog name is Diamond.