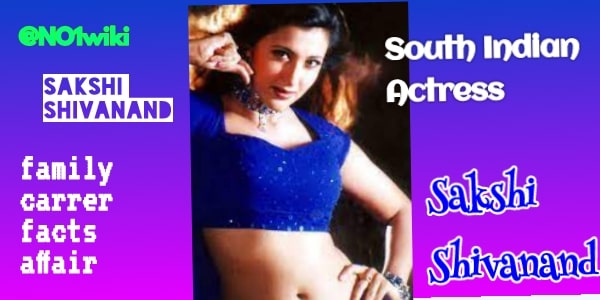 Sakshi Shivanand is an Indian actress who has appeared in Telugu, Tamil, Malayalam and Hindi films. She is mainly famous for her hindi movie “Aapko pehle bhi kahin dekha hai”.

If you want to know more about this famous actress then you are at the right place. Read this article until the end and get to know full and complete details about her life.

She was born on 15 april, 1977 in Mumbai, Maharashtra, India. She is 44 years old. She is also a sister of famous indian actress and model Shilpa Anand. Her zodiac sign is Aries.

Her father ‘s name is Mr. Sivanand. Her mother’s name is Mrs. Sivanand. She has no brother, and she has one sister. Her name is Shilpa Anand. Sakshi Shivanand gets married and her husband’s name is Sagar.

The Career of Sakshi Shivanand

She made her movie debut in 1995 from bollywood movie “Janam Kundali”. Her acting was awesome in her first movie and so she had offered her second movie “Sanjay” in the same year only.

In 1996, she got a movie named “Papa kehte hai” and this movie was a blockbuster. Not only in Bollywood but she became a shining star in Tamil and Malayalam movies too. She did so many South Movies like Indraprastham, Master, Collector garu and so on. She did her last movie in 2016 “Dillagi… Yeh Dillagi”.

She has also lent her voice to Cinderella in The Story of Cinderella, a popular animation television series which was telecast in India on Just Kids! on Sahara TV.

Some interesting facts about Sakshi Shivanand