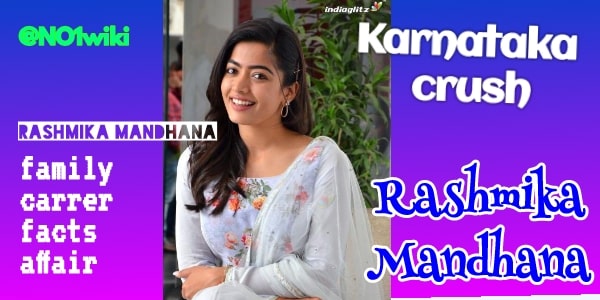 Rashmika Mandhana is an Indian film actress who prominently works for Kanad and Telugu films.

She becomes very popular due to her best acting and beautiful face which make her Karnataka Crush.

She is also selected as an Indian crush girl by one popular news blog. she is one of that rare actresses who able to get that much popularity in such a small span.

She debuts with the film, “Krik Party”, in 2016, but she become popular due to her acting in ” Geeta Govindam”, this film is the highest profit-making film in Telugu cinema.

After that, she also works with lots of different films and most of them become a big hit in Tollywood films.

Rashmika was born on 5th April 1996, in the town of Kodagu district in Virajpit of Tamil Nadu.

She belongs to a middle-class family and completes her schooling in Coorg Public School (COPS), after that she pursued a bachelor’s degree in Psychology, Journalism, and English Literature from the Ramaiah College of Arts, Science, and Commerce.

During her college days, she is very passionate about modeling and acting so she works for different modeling programs and also gets a chance to appear in a couple of commercials.

The career of Rashmika Mandhana

She started her career with “Krik Party” in 2016, and that film becomes the highest-grossing film of that year, by making a profit of 50 crores with a production cost of 4 crores.

Her next release was “Chamak” which gives her little critics from the audience but this film is also one of the hit films of that year.

After that, she gets the best actress award in Kanad, after that she started working for Telugu films.

She started her Telugu film career with the film “Chalo” in 2018, this film is a hit film and soon she gets another film in Telugu which change her life.

Rashmika’s second film in the Telugu language is “Geeta Govindam”, which get lots of good responses from audiences All over India, this film her 130 crores after production cost of 5 crores.

This film made her life and she becomes very popular in India, mainly in Karnataka, Andra Pradesh, and Telangana.

Everyone notices her acting beauty which makes her Crush for every man in India.

Now, in 2020 she is in the film Sarileru Neekevvaru with Mahesh Babu.

Some unknown facts about Rashmika Mandhana.

Rashmika is the highest-paid actress in Tamil, Telugu, and Kannada movies.

Her film is the highest profit earning film of Tollywood.

Mandhana gets engaged with the Hero of “Kikir Party”, Rakshit Shetty in 2017, but the couple called off their engagement in 2018.

Her film Geeta Govindam is height grossing film in Hollywood which earn the highest profit in the history of Telugu Cinema.

In the most desirable woman of 2017, she comes in 1st position according to Bangalore times.

Rashmika Mandhana is one of the few actresses who enter in 100 crore club in a very short period.