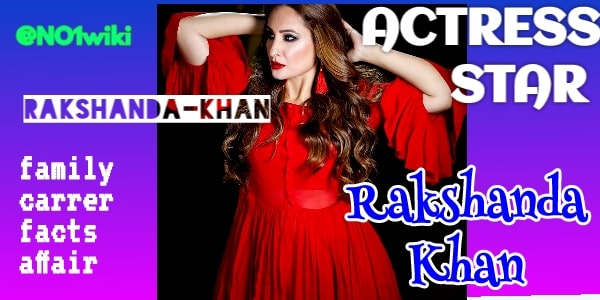 Rakshanda Khan is an Indian actress and model famous for her role in “Kyunki Saas Bhi Kabhi bahu thi”.

She is also famous for her sound.

If you watch the Hollywood movie Iron Man and series, then you remember “Pepper Potts”, her Hindi dubbed sound is given by Rakshanda Khan.

She is a great Hindi dubbed artist she gives her Hindi voice in different blockbuster Hollywood movies like – Iron Man, Mission Impossible, The Mummy, and many more.

She becomes famous because of her performance in different television shows, and also for Hindi dubbed movies.

Rakshanda Khan meet Sachin Tyagi, a father of two daughters, and both meet at a set of “Kabhi Kabhi Pyaar Kabhi Kabhi Yaar”, in 2008, and both start their relationship and both tie on a knot of marriage in 2014.

Rakshanda has a daughter with Sachin Tyagi and today both are in a relationship.

Now, she works as a dubbed sound artist, and now, she is famous for her modeling also.

The career of Rakshanda Khan

Rakshanda start her career as a model and due to her beauty she gets lots of popularity in the modeling field and soon she gets an opportunity to play the role of the main actress in the series named “Jaise Jaissi Koi Nahi”.

She is also famous for her modeling career in which she performs lots of commercials and also hosts some famous tv shows.

Now, she is the wife of tv actor Sachin Tyagi and busy in her work of acting in the web series “Peshawar” with the ullu app.

Some unknown facts about Rakshanda Khan

Rakshanda is an actress who famous for her negative role in Ekta Kapoor serials.

She starts her career as an actress in 2003, from “Jaise Jaissi Koi Nahi”.

She married her co-actor Sachin Tyagi, he had two daughters from her first marriage and after that, he married Rakshanda Khan in 2014, and have one daughter.

She gives her voice in some of the Hindi dubbed famous Hollywood movies like Iron Man, Mission Impossible, e.t.c.

She is a famous tv actress, model, and host, famous for her negative roles in the serials.

Sachin Tyagi is a famous actor and known as the husband of Rakshanda Khan.