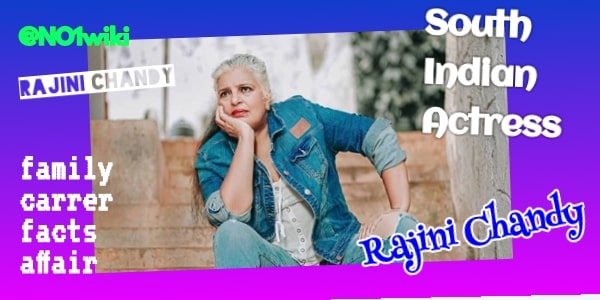 She is a famous south Indian actress. Rajini Chandy was invited to take part in Bigg Boss Malayalam 2 (2020) and she is 68 years old so the audience loved to See her in Malayalam Bigg Boss 2020.

On 5 January 2020, she entered the Bigg Boss Malayalam 2 house as a contestant, hosted by the actor Mohanlal.

She was the first contestant to enter the house and became the first captain of the BB house. She got so many likes and followers with her who wanted her to win.

Rajini Chandy was born on Wednesday, 18 July, 1951 in Kochi, Kerala. She was one simple housewife who completed her education studies from St. Sebastian’s High School, Thodupuzha, Kerala.

After completing her high school studies she thought she must complete graduation. And for graduation she attended Alphonsa College, Palai, Kerala.

She was good in studies so her family always supported her to encourage her interest towards studies. She belongs to a middle class family. Her father was a school headmaster. She has seven siblings.

Her parents later married her to Varghese Chandy (a stock market professional) on 31 July 1970, before completing her graduation.

They were leaving a happy married life and soon this couple was blessed with a daughter Ciena Thomas.

She married her daughter to a man from the USA and they settled there.

The Career of Rajini Chandy

Before starting career in the acting field she was working for a real estate company.

But later she opened a fitness center for elderly people which was going on well.

She always tried to give her best to any job but for a reason she has to quit this job also. But she didn’t sit quite, she practiced the 10th standard maths syllabus and opened a coaching centre for poor children.

In an interview, she said her first batch was Afsi, Chikkuma, and Regina.
She was also nominated as a participant in Malayalam Bigg Boss 2020.

Her career starting was small but today she is standing at a top most level in the South Indian film industry.

Some unknown facts one should know about Rajini Chandy

Rajini Chandy is also a good painter. During her free time, she used to do painting.
She also did a course on drum biting.
She regularly visits the gym daily. She so much cares about her fitness.
She debuted in films as a heroine at the age of 65.
She loves to eat non-vegetarian food and drink wine.