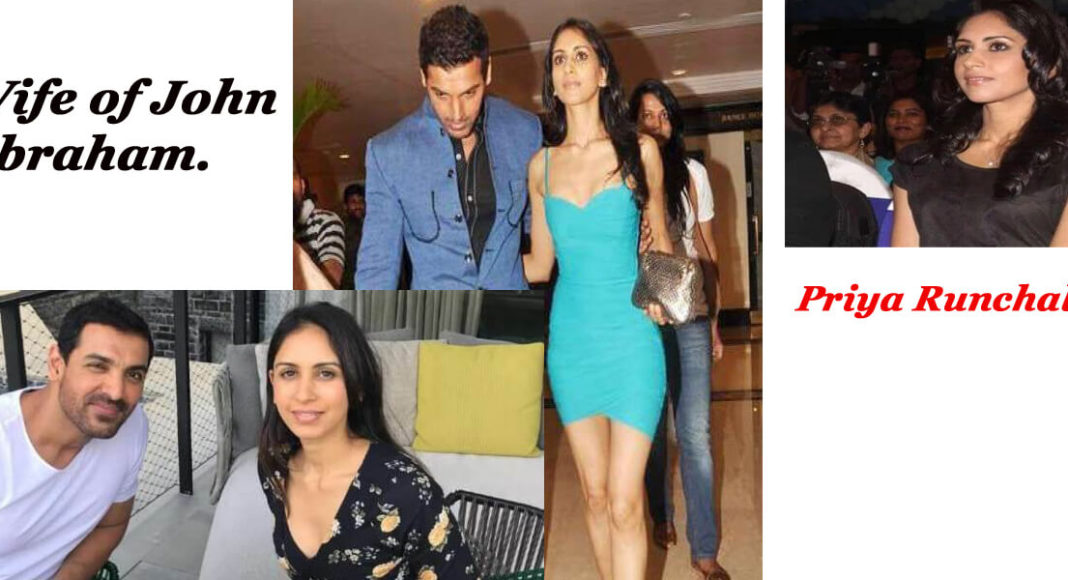 Priya Runchal is a very close name to Bollywood town. But there is a chance that you may hear this name for the first time Because she is not a Bollywood Heroin.

Will you here name – Priya Runchal for the first time?

In the year 2014, John Abraham reveals this name with shocking good news.

John Abraham reveals that Priya Runchal is her Girl Friend and they are going to marry on 3rd January 2014.

If you want to know about Priya Runchal religion, son, age gap, and Priya Runchal movies & many more including john Abraham’s wedding, then stick to this article till end and enjoy.

Who is Priya Runchal.

Priya Runchal is a financial analyst by profession and both John and Priya have kept their personal relationship under the wraps for a very long time.

According to John Abraham, she is the pillar of his strength and his wife Priya brings a lot of maturity to their relationship.

But, she always chooses to take a step back from the spotlight of being John Abraham’s wife.

In 2010 John Abraham was dating Bipasha Basu of Bollywood and according to the rumours, In 2010 at GYM of Bandra (Mumbai) he meets Priya and after some time we get the news that John & Bipasha had a break-up.

So, this gives all media to make news with spice that John cheated on Bipasha with his now-wife Priya Runchal.

But, at one interview John clarified that he met Priya in 2011 i.e.; after a break-up with Bipasha.

And in 2014, this interview ends the controversy of Priya Runchal & Bipasha Basu.

She was born in a very wealthy family. Her dad involved in a very profit-oriented business. She was born as American but, her family roots are from Kangra, Himachal Pradesh, India.

She began his career after persuing both degrees (Law & MBA) with International Finance Corporation (IFC).

IFC is a member of the World Bank.

She cam in the eye of media in 2011 with John Abraham. But John never revealed his relationship status with Priya.

In 2014, she got married to John after 3 years of relationship in Los Angeles and shocked every one of Bollywood.

In 2011 rumours regarding john break-up with his ex-girlfriend (Bipasha) also spread in media but john denied all the facts.

But, “according to media John and Priya met at GYM”, On that statement, John says that It was much later when she started coming to the same gym where he worked out.

No kids from John and wife Priya.

They said that the thought of having children has crossed their mind several times but they are not ready to plane a family yet.

Where does Priya Runchal Work?

Priya works as an Investment Banker and a Financial Consultant Expert in Bandra Kurla Complex, Mumbai.