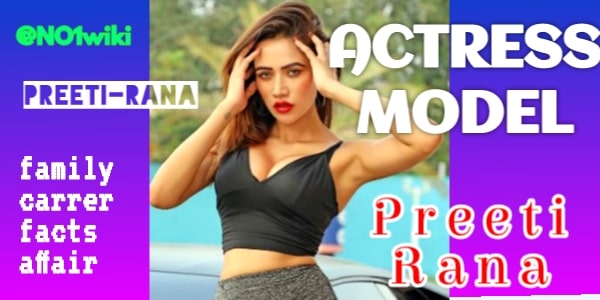 Preeti Rana is an Indian actress famous for her role in the hit film of Varun Dhawan named Badri ki dulhaniya.

She plays the role of receptionist in that comedy film and after that she also featured in English film name “The Anglist anis” in 2020.

If you also want to know about this actress who is very popular in social media as a social media influencer, then just stick to this article until the end.

She was born on 27th September 1990, in a middle-class family from Jaipur, Rajasthan, and Rajput in caste.

She is interested in computers, so she visits Greenwich University, London, and completed her masters in Distributed Computer Systems.

In college, she gets the dream to be a successful actress and model and to pursue her dream she started her career as a model after returning India.

She gets her spotlight because of her presence in Bollywood film Badri ki dulhaniya. She also able to attract fans due to her furious look and able to increase her social media following and also make a wonderful career as a social media influencer.

The career of Preeti Rana

This actress is very passionate about her acting and modeling a career which she wants to pursue as her full-time career since her college time.

So, she started her career as a model and participating in lots of different modeling and fashion shows in London during 2008.

After returning to India she also participates in Miss International Princess beauty pageant held in 2010 and emerged as the first runners up.

Preeti Rana also featured in a British Hindi movie whose name is ” A Wedding Most Strange” and after a long time in 2020 she appeared in another British movie ” The Anglist anis”.

She saw lots of difficulties in her career and after many modeling and hosting shows, she has time to appear as a supporting actress in Badri ki dulhaniya in 2017.

She participates in different modeling contest actively in 2010, in those days she participate in “Make me the Next model 2010” and “Naomi Campbell’s Global Model Search 2010” and reached the last rounds of both the events.

After that, she gains some popularity in Bollywood town and gets a chance to host some Bollywood press conference and also host promotion of “Yamla Pagla Deewana 2”.

After completing her study she also works as an IT professional in the Cooperate world for 12 years.

She also featured in some Punjabi music videos and now she is a famous model and we’ll know social media influencer.

Some unknown facts about Preeti Rana

●     Preeti Rana is an excellent dancer and loves to dance in her free time.

●     Her favorite holiday destination is Dubai.

●     She revealed that her favorite actors are Amir Khan and Akshay Kumar.

●     She is a very fitness freak and workout on regular basis.