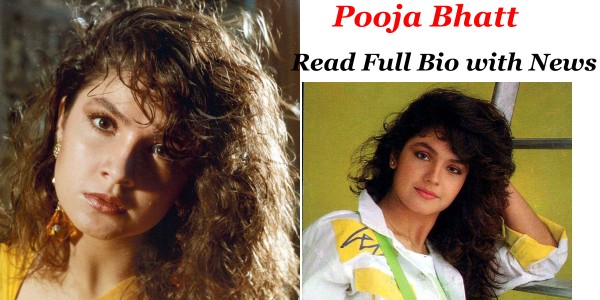 She is the recipient of several accolades, including two National Film Awards.

She born in Bhatt family and his father Mahesh Bhatt is well known director of Bollywood town.

Pooja Bhatt played the lead role in Mahesh Bhatt’s television film “Dady” in 1989. For this film she won the Filmfare Awards for Best Female Debut.

Pooja was born on 24th Feb 1972 to Mahesh Bhatt and Kiran Bhatt.

On her father’s side, Bhatt is predominatly Gujarati descent and on her mother’s side she is of English, Scottish, Armenian, and Burmese ancestry.

She has a brother named Rahul Bhatt and have step-sister named Shaheen and Alia Bhatt. She is a cousin of Emraan Hashmi.

Pooja Bhatt start her career at the age of 17, with film “Daddy” that film was directed by Mahesh Bhatt.

The Career of Pooja Bhatt

Pooja is back to acting after alomost 2 decades in Sadak 2, a sequel to the hit of 1991. With this film her father also return in direction and it is set for release in 2020.

Mahesh Bhatt became the talk point in the Bollywood Town and slammed by his fans after the filmmaking photoshot of a magazine cover.

In that magazine photoshot she kissied her daughter Pooja Bhatt on her lips.

However, Mahesh Bhatt quote further fuelled in the fire and that quote was :”If Pooja was not my daughter, I would like to marry her”.

Some Unknown Facts of Pooja Bhatt.

Her first big screen debut film is “Dil Hai Ke Maanta Nahi” this film was remake of the Hollywood movie, “It Happen One Night”.

She won a National Film Award for the Best Film on Other Social Issues, for her film “Tamanna”.

In one interview she says that if she not be an actress, then she would be an astronaut.

Pooja Bhatt is very close friend of Sharadha Kapoor and she likes to hang out with her gang of ladies.

She always prefer to use her real name for her movies.

She is also well known for her modeling career. In one photoshoot she did a nude photoshoot with just bronze paint on her body.