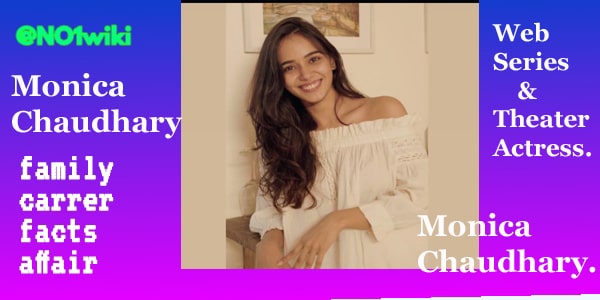 Monica Chaudhary is a famous Indian actress and also she is a theatre artist.

She began her career by modeling in the entertainment industry. She got the main spotlight and became famous because of her best performance in a new web series of 2020 “Dark 7 white.”

She had also worked in so many popular web series like “Apaharan” in the year 2018 and a hit movie Amriki Pandit.

Monica Chaudhary was born on 6 September 1995 in Delhi, India.

She belongs to a middle-class Hindu family. She had never dreamed or have thought to work and be a part of the entertaining industry.

The whole credit of being here as an actress directly goes to actor Himanshu Ashok Malhotra. He encouraged her and made her attention towards an acting career.

Then, she had joined the Smita Theatre group for 4 years and had time to step ahead towards her new career.

If you are interested in known about this actress, then you are in the right place just stick to this article until the end.

The Career of Monica Chaudhary.

Monica Chaudhary had played various roles in the acting field.

As she was started with a modeling and theatre actress background.

But later she got to play roles in very famous and hit web series like Apaharan in the year 2018 and Dark 7 White in the year 2020.

Also, she worked in the film Amriki Pandit.

Some unknown facts about Monica Chaudhary

Before acting in the web series Monica Chaudhary was Theatre Artist.

Monica Chaudhary is the brand ambassador of Oxfordcaps.