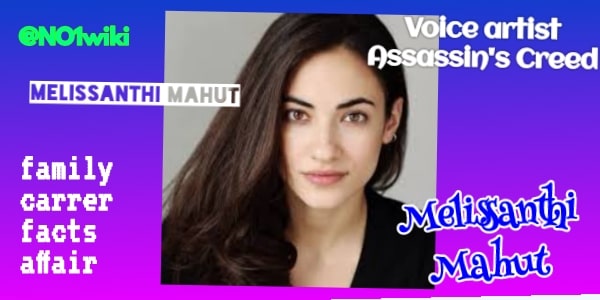 Melissanthi Mahut is a Greek-Canadian actress, she is famous for her voice which is provided for the character of Kassandra in Assassin’s Creed – Odyssey.

She is one of the most beautiful actresses who works as a model and actress, if you also want to know more about this beautiful lady then stick with this article until the end.

Melissanthi provides her voice to the character which name is Kassandra in Assassin’s Creed Odyssey and also famous for her performance as a Mita Xenakis in the Netflix film Eurovision Song Contest – The Story of Fire Saga.

In Assassin’s Creed – Origins which was released in 2017, Melissanthi provides her voice to many background Greek citizens of Egypt.

After her voice performance in this film, she gets the opportunity to work as a voice artist in another project which is the sequel of this film and she ready to do this and give her first audition in London and flew back to Canada for the final audition.

In the final audition, she met with a famous sound artist name is Michael Antonakos, with whom she performed the final audition and after that, she got selected as the lead role in Assassin’s Creed – Odyssey which releases in June 2018 and this make her very famous.

The Career of Melissanthi Mahut

Mahut was born in Toronto, Canada and she raised in Greece, she is very passionate about modeling and acting and wants to earn lots of fame in this field and that’s why she attended the National Theatre of Greece Drama School and later she went to study at the Royal Academy of Dramatic Art.

She graduates with RADA with a BA in Acting in 2012.

After completing her study she starts her career as a model in Greece and soon she gets theatre production work and she featured in the film “Mythopathy”.

In 2017, she gives an audition for the role of Kassandra in the video game Assassins Creed and her voice got selected and after that, her voice again got selected for the sequel of this film, and this makes her very famous.

In 2020, she gets the opportunity to appear as the Greek Eurovision contestant, Mita Xenakis, in Netflix film – Eurovision  Song Content.

Now she is working as a famous model and actress.

Some unknown facts about Melissanthi Mahut

Melissanthi Mahut starts her career as a model and theater artist and soon she was selected as a voice artist in Assassins Greed and this makes her famous.

She struggled a lot to work as a model but due to her voice, she gets popularity and the opportunity to work as an actress.