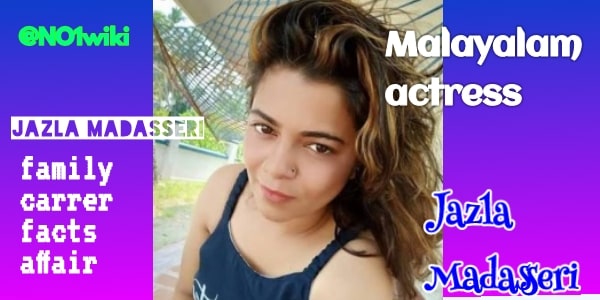 Jazla Madasseri is a Malayalam actress, a social activist from Kerala state, and famous for her acting and modeling performance.

If you see her in Bigg Boss Malayalam season 2, and also in some South India films and want to know more about her then you are in the right place.

Jazla Madasseri was born on 29th Aug 1995, in Manjeri, Kerala, India. She was born in a middle-class family but passionate about acting.

In education, she is a bright student and she completes her MBA in the Human Resources department.

She belongs to a Muslim family and always in the media due to her acting, hosting, modeling, and some shows participations.

Now, she is busy making her political image and her career in the film industry.

Jazla is one of the lucky girls who always inline light of the popularity of media.

She is famous for her performance in the Malayalam film industry and her social activities which make her a rising political leader.

As she is very passionate about acting since her childhood, she is working very hard to get some opportunities in this field and she gets that opportunity when she passes the audition in Hyderabad for her first Malayalam film.

She is a very good student also, so complete her MBA degree and after that, she becomes a part of Malayalam films and in her starting days, she works as a show host and anchor in many tv and non-tv shows.

Her popularity rises to the sky when she becomes a part of Bigg Boss season 2, in a wild card entry.

Now, she is very busy in her social activities which makes her a popular leader in Kerala politics.

Jazla’s father work as a secretary of a local mosque.

She is a very good dancer and a tattoo artist.

Jalzla is also famous for her arguments and controversial statement on social issues.

She also becomes a part of lots of news headlines because of her social activities.