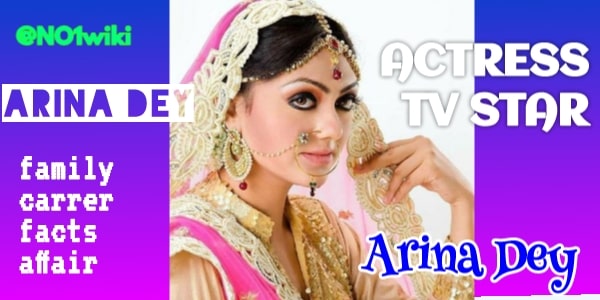 Arina Dey is an Indian television actress, she is known for television shows Barrister Babu.

She started her career with TV serials and now also known for her best acting in different types of TV serials.

If you are interested in Television serials then you are in the right place you just have to stick to this article until the end to get something very interesting.

Arina was born in Kolkata on 14th June 1991. She was a very good dancer in her childhood but her father was not happy with her dancing passion.

She completes her education with good marks from Kolkata and with the graduation degree she wants to pursue acting as a full-time career.

When she started acting classes than her father not get ready and after lots of stubbornness, she able to get permission for theaters.

Arina visit Mumbai only the condition of two years and after that started her career in theater shows.

The Career of Arina Dey.

Arina started her journey with modeling shows. After which she got a chance to work in a Muskaan television serials.

She gained a lot of fame through modeling and due to her best performance in modeling she gets the chance in television shows.

Arina gets the spotlight with her first television show. After working in this serial, she appeared in many shows like Vish Ya Amrit: Sitara, Laal Ishq.

She gets lots of small and big roles in different Television shows and now she is well-known tv and successful tv actress.

Some Unknown Facts About Arina Dey.

Arina Dey was born and brought up in Kolkata.

Her father did not want to let her enter the acting industry.

Her father locked up her in a room for a month, but later she gets permission with the condition of two years.

Arina worked in many theater shows during her college days in Kolkata.

Arina Dey has a Gayatri Mantra Tatto on the right shoulder.

She also worked in Bengali films.

She will be seen in Color’s TV show Barrister Babu in 2020.