NO.1 WIKI World’s NO. 1 Wiki Platform Now, nothing will be secret.
Home ACTRESS Ananya Kolvankar – Read full & best bio of child artist as... 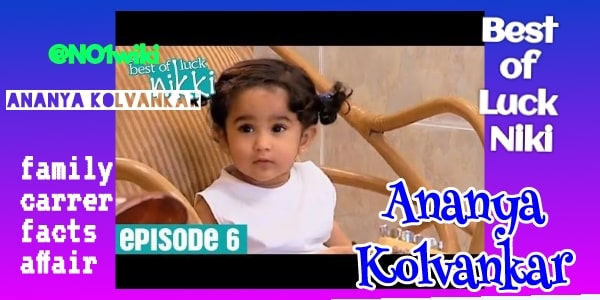 Ananya Kolvankar is the youngest child actress, she is famous because she performs the various role in different commercials and TV serials.

If you ever watch famous comedy TV serial name “Best of Luck Niki”, in that serial the youngest member of the Singh family is Nikita Singh and that character is played by Ananya

After that, she also appears in some small commercials and this makes her little star of television.

The career of Ananya Kolvankar

Ananya start her career in serial acting when she was just some months old.

You can say that this is a bit of luck but this is the best luck which makes her star in her so young age.

She performs in a main role in the famous TV serial name – best of luck Niki and through that TV serial he able to make a wonderful debut in the acting world.

After that, she also appears in some commercials but her performance in best of luck Niki made her a star and famous everywhere.

Some unknown facts about Ananya Kolvankar

Ananya Kolvankar start her acting journey when she was very small just some months.

She also appears in some commercials and converts her acting journey into a modeling journey.