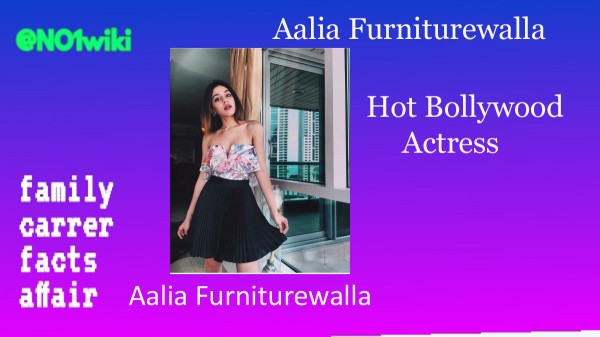 Aalia Furniturewalla known as Alaya F as a stage name.

She is an Indian actress who works for Hindi films. She is the daughter of Farhan Ebrahim Furniturewala and actress Pooja Bedi.

She made her film debut in 2020 through a leading role in the comedy film Jawaani Jaaneman.

If you are interested in films and want to know more about her then you are in the right place.

Just stick to this article until the end and get some unknown facts about Alaya F.

Alaya F is the name that she gets as a stage name in the Bollywood industry.

She was born on 28th Nov 1997 to actress Pooja Bedi and businessman Farhan Ebrahim Furniturewala.

She is a granddaughter of the former model and classical dancer Protima Bedi.

She studied at Jamnabai Narsee School in Mumbai.

She did her diploma in acting at New York Film Academy and change her name from Aalia Furniturewalla to Alaya F.

She is a trained Contemporary and Kathak Dancer.

The Career of Aalia Furniturewalla.

Aalia made her Hindi film debut with Nitin Kakkar’s Jawaani Jaaneman (2020). This film was produced under the banner Pooja Entertainment and received positive reviews.

Aalia Furniturewalla is now preparing herself to make some other films and also wants to start her career in modeling.

Some Unknown Facts of Aalia Furniturewalla.

Aalia Furniturewalla was born into a family of actors and models. Her uncle also works in the entertainment industry and moreover, her maternal grandmother, was a model and dancer.

Aalia learned the art of acting from the New York Film Academy.

In 2013, she was awarded the Balakratna National Art Award for excellence in art.

In 2016, Aalia along with her mother Pooja Bedi, appeared on the cover page “Femina” magazine.

She also appeared in an advertisement for Ponds on television.

Aalia Furniturewalla was also the face of “Flying Machine”.

She received training in Kathak and Contemporary dance forms.