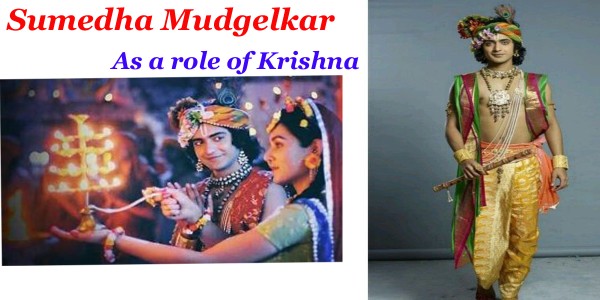 Sumedh Mudgalkar is well known as an Indian television actor as well as dancer.

He made his telivision debut through Channel V serial “Dil Dosti Dance”.

Sumedh get his fame for his work on serial “RadhaKrishn” as a Lord Krishna and Shushim in Chakravarti Ashok Samrat.

The real name of Sumedh Mudgalkar is Sumedh Vasudev Mudgalkar.

He was born on 2nd November in 1996 in Pune, Maharashtra.

Since his childhood, he was obsessed with dance. His family also supported him for his dance career to pursue his dreams.

He show his passion for dance through a dance reality show “Dance Maharashtra Dance” in 2012.

In 2013, he participate in “Dance India Dance 4”, where his impressive dancing display earned him the nickname of “Beat King”.

His impressive dance at Dance India Dance 4 earned him his debut acting opportunity on Channel V.

After his DID dance performance he gets the show based on dance which is “Dil Dosti Dance” (2014), where he played the role of “Raghav”.

In that show, his acting skills were first recognized when he played the negative role of “Yuvraj Sushim” in serial “Chakravarti Ashok Samrat”.

His acting in that Colours TV serial give him another opportunity to work in Marathi Films.

As he is a Marathi, so he always wanted to show his acting skills in Marathi entertainment industry.

He made his first appearance in Marathi film with a very small role in the film name “Ventilator (2016) as “Karan”.

After that in 2017, he grabbed his first Marathi film as lead actor in “Manjha”, where he played the role of “Vicky”, a psychopath character.

That serial provide him a breakthrough role that ruled the hearts of people.

Through dancing has always been a passion and first priority for Sumedh Mmudgalkar.

He never let it hamper his studies, he did his schooling from Sinhgad Springdale Public School, Pune and did his Graduation in Economics from Maharashtra Institute of Technology, Pune.

He start participating in dance competitions from very young age in his school.

When he started his TV career he is in school, but he continued doing TV shows with his schooling and complete his education with his graduation in Economics.

After Sumedh Mudgalkar’s one of the best performances in RadhaKrishn his household name became Krishna in the epic love saga of Lord Krishna and Radha, alongside Malika Singh.

Some Unknown Facts of Sumedh Mudgalkar.

He is fondly called “Suma” by his close ones.

He is a very big dog lover.

He had his first crush when he was in the first standard.

Sumedh is not a trained dancer he just learned the dancing skills by watching videos.

He is a versatile dancer and has the forte in ‘Dubstep’ and ‘Popping And Locking’ dance forms.

Music is his biggest stressbuster and he carries a portable speaker wherever he goes.

He had his fanboy moment when he acted alongside “Madhuri Dixit” in the Marathi Film “Bucket List” in 2018.