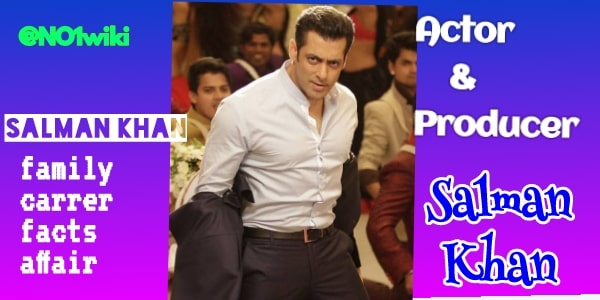 If you belong to India and watch Bollywood films then you must know Salman Khan.

He is a famous Bollywood actor, producer, occasional host, and singer and famous for his marvelous work in Hindi cinema.

If you want to know about him then you are in the right place just stick to this article to know more about Salman Khan.

Salman is the eldest son of screenplay writer Salim Khan, and he has two brothers named are Sohail Khan and Arbaz Khan.

He is very active in his acting career from 1988 till now.

According to Forbes 2018, he is the highest-paid Indian celebrity in the entertainment category.

Khan won various types of awards including two national film awards for film production and two film fair award for acting and some other numerous awards.

In media, Salman considers as the most successful actor in both worlds as well as India.

The career of Salman Khan

He starts his career with his film “Biwi ho to Aisi”, his role was very appreciated by the public and then he tries to play a leading role in the romantic film and he gets Maine Pyaar Kiya in 1988, which first big hit film in the career of Salman Khan.

Later he gets a film in 1995 where he Co-star Madhuri Dixit, “Hum Apke Hai Koun” this film won 3 film fare awards and Salman gets 2 national awards those years and this film rise his name and make his career secure in the film industry.

After that, he gets the opportunity to work in lots of different types of movies and get lots of awards for that.

But, those first films make his career secure in Indian Hindi cinema, later his performance makes him a star of Hindi cinema.

Some unknown facts about Salman Khan

He is a very good swimmer since his childhood.

In 1988, hdedebutsut with the film Biwi ho to Aisi, in which his voice was dubbed by a dubbing artist.

During the shoot of London dream, he flew his cook to London for cooking biryani, ni and till shooting complete whole crew was under the pressure to eat the same food.

In 2014, he start a new production company with the name of, Salman Khan Production (SKF), the first movie to be released under his company SKF was “Dr. Cabbie,” which was a Canadian movie that became the second highest-grossing film in Canada.