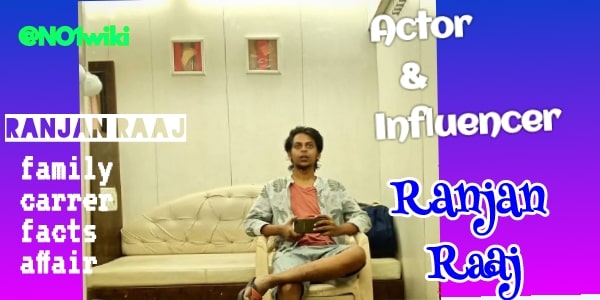 If you watch a web series on YouTube with the name “Kota Factory” and inspire by the role of “Meena”, and want to know more about him, then you are in the right place.

The main role which makes him popular was the role of “Meena” in “Kota Factory”, that he gets the role in Sushant Singh Rajput film “Chhichhore” and his popularity increase in such a way that he becomes a social media influencer.

He is passionate about acting so start his career in acting she visits Mumbai and starts working in theaters.

Now, he is famous because of his role in the web series “Kota Factory” and after that, he works for the Bollywood film “Chhichhore”.

He belongs to an agriculture business family, his father has a big landholding which they use for farming.

He is very good at study and he cracked IIT and secured his admission at IIT Bombay.

He left IIT Bombay to pursue his dream of acting.

The career of Ranjan Raaj

Ranjan is very good at study, he can make a very well career in engineering because he cracked IIT and secure his admission in IIT Bombay.

But, he dropped his IIT college and start working to pursue his dream of acting.

He starts his acting career as a theater artist and due to his performance, he gets a role in web series, and that “Kota Factory” made him popular and he gets Bollywood film and in that film, his funny role made him more popular.

Ranjan Raaj also works in movies but before that, he is a theater actor and his first movie was “Suruaat Ka Interval” in that movie he plays the short role of ticket checker.

After that he plays lots of small roles in different movies like “Interval 3D”, “Lots of Love”, “The Monetization”.

His popularity becomes the region that he is a well known social media influencer and working very hard for success daily.

Some unknown facts about Ranjan Raaj

When no one supports him for his acting career his mother supports him because she always wants to see her son as an actor.

When he was in 4th standard act for the first time on the stage.

He is one of the activist performers in the cultural program of his college and school.

His Bollywood career was started with ‘Rustom’ film.