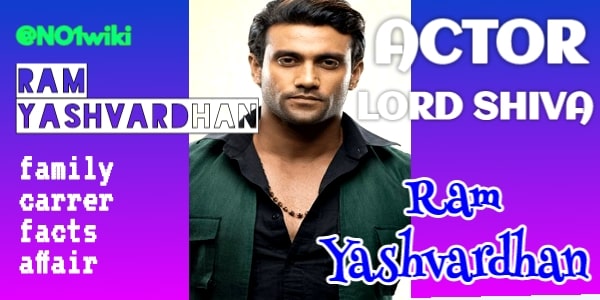 Ram Yashvardhan is an Indian television actor, he got spotlight due to his best acting as a Lord Shiva in ‘Kahet Hanuman Jai Shri Ram’ and his role in ‘Ek Tha Raja aur Ek Thi Rani’.

If you are interested in acting then you must have to read this full wiki until the end.

Yashvardhan was appeared for the exam to become a pilot but before the result of the exam he join the acting classes in Delhi.

After learning acting for a few months, he bagged a Marathi Film “Uday”.

In 2019, Ram start her career with the serial “Ek Thi Rani Ek Tha Ravan”, which aired on Star Bharat.

He played the role of “Rivaj”, which was a negative role in that serial. This serial was based on Shah Rukh Khan’s film, Darr.

Some Unknown facts about Ram Yashvardhan.

According to him, he is very particular about his fitness.

He loves to write poetry and has launched a book on poetry.

Name of his book is Life of Ram Yashvardhan.

Ajay Devgan is his favourite actor.

His dream role was to portray a character having different shades. According to him he has started his career with his dream role itself.

Yashvardhan dislikes travelling and hanging out with friends.

He joined the gym just after his schooling and work out for at least one and a half hour every day.

His favourite athlete is Saina Nehwal.

Ram had to put on 10 Kg of weight for his role on the serial “Ek Thi Rani Ek Tha Ravan”.

Ram is married and married to makeup artist Ppratika Chimni.

The Career of Ram Yashvardhan.

He is very passionate about acting and writing poems. But, his family want to send him in Indian Air Force but he chose acting as his career.

He gave Indian Air Force exam but before geting result he joined acting school in delhi and never try to know about that IAF exam result.

He get spotlight because of his role in “EK thi Rani, Ek tha Raja”.

He loves poems, so he also publish his own book of poems named “The life of Ram Yashvardha”, this book was not a big hit.

But he famous television star and marathi actor also. He love animals and has a pet dog whose name is Romeo and he also want to open an NGO for animals.

Now, ram Yashvardhan is preparing for his new acting work.

Ram is married and married to a makeup artist Pratika Chimni.