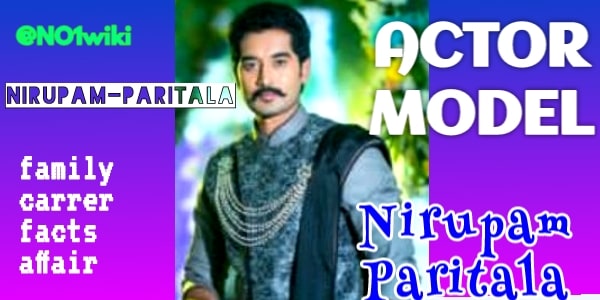 Nirupam Paritala is an Telugu actor, writer, and model.

He Get spotlight with his TV serial Karthika Deepam, he made lots of serials, movies.

If you are interested in South Indian movies and Telugu serials then you must have to stick with this article until the end, and get full wiki/bio with some unknown facts .

He is the son of famous scriptwriter Ohmkar Partala, who has already been a part of Telugu cinema.

He has a fascination with movies and TV serials which keep him at another level in his industry.

His famous TV serial Karthika Deepam made him a star, and lots of fans appreciate him for the role of Dr. Karthik in that serial.

Currently, Nirupam Paritala resides in Hyderabad and preparing him for his new TV serial or film.

The career of Nirupam Partiala.

Nirupam has not only worked in TV serials, but he also participates in lots of reality shows and game shows as well.

In Jeans and Cash, his appearance is very appreciatable which is another famous reality show.

He started his career with Chandramukhi, which is his only lead role movie which released in 2008.

Nirupama Partiala has been honored by numerous awards on several anniversaries and film award functions.

He won the best couple award from Okariki Okaru Awards hosted by Chaitanya and Jhansi.

Nirupam Paritala is a great actor with lots of potential talent and he always tries to learn more and he is also famous for his good behavior which makes him one of the best actors in Telugu film industry.

Some Unknown Facts about Nirupam Paritala.

Nirupam Paritala is not only a versatile actor but a great writer by hobby and has even written several scripts for TV characters.

He completed his graduation in MBA from SCSVMV University and made an entry in the TV industry in 2008.

His favorite actors are Rajnikanth and Pawan Kalyan in the Bollywood film industry his favorite actress is – Yami Gautam and Alia Bhatt.

Manjula Paritala is the wife of Nirupam paritala.