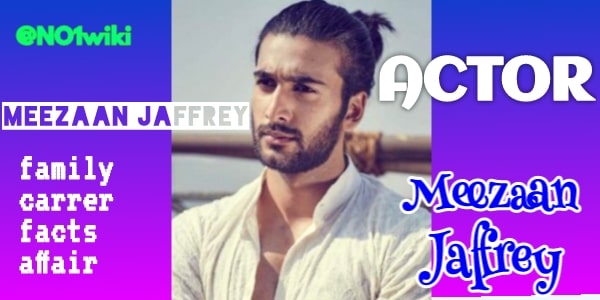 Meezaan Jaffrey – Get Full Bio of Son of Javed Jaffrey on No.1 Wiki

Today we going to give you full biography and some details on the elder son of Javed Jaffrey.

His elder son named Meezaan Jaffrey did his successful debut with the film “Malaal”.

If you are a fan of the voice of Javed Jaffrey and want to know about the career of Meezaan Jaffrey then you are in right place.

Meezaan is Islam religion and he was born in a Shia Muslim family.

Meezaan has an attractive appearance with 6 feet height and 75 kg weight, we talk about this in later sections of this article.

He did his graduation in business and after that, he visits School of Visual Arts, New York to pursue a course in filmmaking.

From one film of Sanjay Leela Bhansali named “Bajirao Mastani”, Meezaan starts his career as an Assistant Director.

In 2019, he made his Bollywood Debut with film “Malaal” and this film is also directed by Sanjay Leela Bhansali.

As from the name of Javed Jaffrey we can get that Meezaan was born in the family of an actor.

He went to Ecole Mondiale World School, Mumbai for his primary to high education.

Meezaan completes his graduation in business from Mumbai but soon he visits New Your to complete his education with a degree in Visual Arts to pursue a course in filmmaking.

Jafri began his career as an Assistant Director for Sanjay Leela Bhansali from the film “Bajirao Mmastani”.

Soon he got a film to debut in the Bollywood with co-actor Shamin Segal.

That film is also directed by Sanjay Leela Bhansali named “Malaal” in 2019.

His film career is just started with that one film and everyone is waiting to see Meezaan Jaffrey as a successful actor in the Bollywood town.

Meezaan Jaffrey is very young and so he is yet unmarried but he spotted several times hanging up with Amitabh Bachan’s granddaughter Navya Naveli Nanda.

But Meezaan denies that Navya Naveli as his girlfriend.

Some Unknown Facts of Meezaan Jaffrey

Meezaan is the eldest son of Javed Jaffrey.

In 2019, he made his Bollywood debut with Sanjay Leela Bhansali’s film named “Malaal” in that film he works with nice of Sanjay Leela as a lead role.

Meezaan had no intention of entering the glamour world. He says in one interview that –

“I never intended to get into the industry or try filmmaking. I was actually inclined towards sports and music more than acting. My co-star Sharmin is my classmate and she was assisting for Mary Kom. After we were done with school. I was studying business, but then I joined film school because I thought business did not suit me and I wanted to try editing and direction and I became an assistant director”.

He is very close to his mother and his father is very strict.

When Meezaan Jaffrey was in school, he has represented the state of Maharashtra in many inter-and-state-level Basketball competitions.

Meezaan is also a very good swimmer and footballer.

Meezaan Jaffrey was a body-double for Ranveer Singh in the film “Padmavati”.