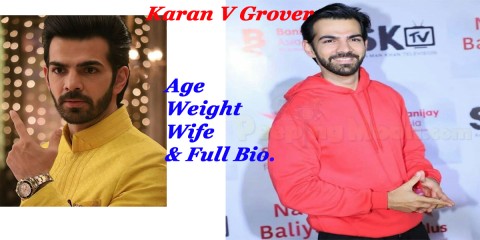 Today we are going to talk about one of the famous T.V actor i.e.; Karan V Grover.

If you watch T.V serials then you might ever watch, Punar Vivah, Saarrthi, Hum Aapke Hai In-Laws, Bahu Hamari Rajnikant.

If you are new in watching T.V serials then you might hear about Kahaan Hum Kahaan Tum and Web series name Spotlight 2 on viu app.

I think now you understand that you get full information here about the man you are searching for.

Karan V Grover is an Indian television actor. He is well known for his best acting in different T.V serials.

He worked as an event manager for a year before receiving an offer to appear on Gladrags and after his appearance he gets lots of chance in different types of roles.

Karan is famous for his different types of roles which he played successfully in different serials. Now, he is working on one web series named Spotlight 2 which you can watch from Viu App.

The above information tells you about the rate of Karan V Grover, which means he charges 35,000 INR per day for a shooting in a T.V serial.

Karan is Unmarried, But he has an Affairs/Girlfriends named Kavita Kaushik (Actress) and after that, he is in relationship with Poppy Jabbal (Model)

He put in his paper that he signed a film and will leave for it next month.

The last day of his shoot makers was made him revoke his decision. However, Karan not takes makers seriously and leaves the Bahu Hamari Rajnikant for the film.

The actor is dating Poppy Jabbal, an indian model and host.

Television actor Karan V Grover, winning a lot of hearts as Dr Rohit Sippy in Kahaan Hum Kahaan Tum, recently in one interview he said that he is about his wedding plans with his long time girlfriend Poppy Jabbal.

Poppy have been in a relationship with Karan for more that 6 years.