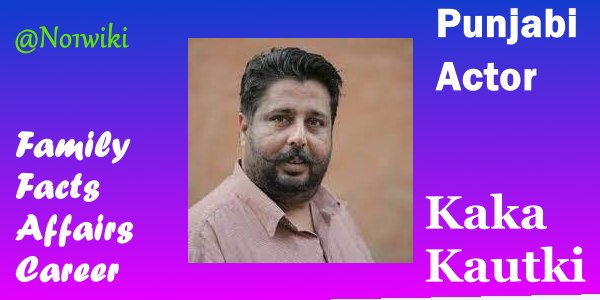 Kaka Kautki was a Punjabi actor and comedian. His real name was Varinder Pal Singh, and also he is well known as Kaka Mansa and Kaka Kautki. He was mainly famous for being Bhaktawar’s associate in one of the superhit Punjabi movies named “Bhajjo Veero Ve”.

He was born on 24 August 1984 Friday, and he died at a minimal age, just 37 years old. He died on 26 November 2021. His birthplace was the Dashmesh Nagar Mansa, and his death place was Mohali Chandigarh. He died because of a heart attack.

He had never shared his father’s name, but his father is a retired officer from the Food Corporation of India. His mother’s name is Rajendra Kaur Dani, and she is a well-known theatre artist. Also, he has a brother named Harjosh Tung, and he was from a very well known small lovely family.

As we have discussed his mother, was a well-known theatre artist. So she always used to take him to theatres along with her, and he had started his acting career at the age of 6 and played the role of Muslim child for the first time.

He has acted in so many Punjabi movies, and some of them are well known because of his roles and his popular movies are as follows:-

As we have discussed, he was a very well-known Punjabi actor and comedian, so he had a huge fan following on his different social media platforms. He was mainly popular because he played roles in different Punjabi movies.

Some unknown facts about Kaka Kautki