NO.1 WIKI World’s NO. 1 Wiki Platform Now, nothing will be secret.
Home ACTORS Dhanveer Gowda – Read full & best bio of Actor of ‘Bazar’... 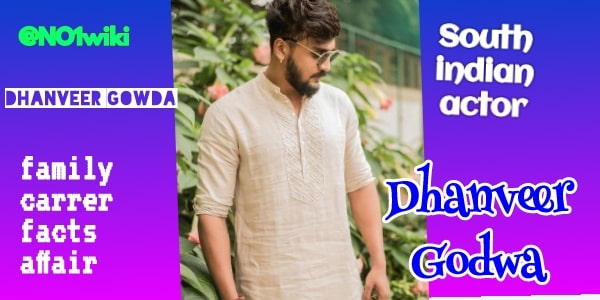 Dhanveer Gowda is an Indian actor famous for her performance in film Bazar.

He is an actor who starts his career in Kannada films and also works in some other language south Indian films.

If you see him in the film Bazar, or in any other south Indian film and curious to know about him then stick with this article until the end.

Dhanveer was born on 8th September 1995in Bangalore, Karnataka, in a middle-class family.

His family wants that him become an engineer but he is very passionate about modeling and acting.

He starts his auditions when he is in college and after lots of struggling auditions he get the opportunity to work in the film Bazar and he becomes a famous actor.

The career of Dhanveer Gowda

Dhanveer start her career in acting and modeling when he was in college.

He struggled in many auditions and after that, he gets the opportunity to work in South Indian films.

He also appears for some short roles in films but he does not get enough appreciation but soon after in 2020 he gets the Kanada film name Bazar and this film makes his dream true.

His acting in the film Bazar gets lots of appreciation from the audience and this makes him popular.

Some unknown facts about Dhanveer Gowda

Dhanveer is a die heart fan of Darshan Thoogudeepa.

His family wants that his work for MNCs, but his passion for acting makes his dream true.

Dhanveer Gowda is a famous actor due to his first Kannada film Bazar.