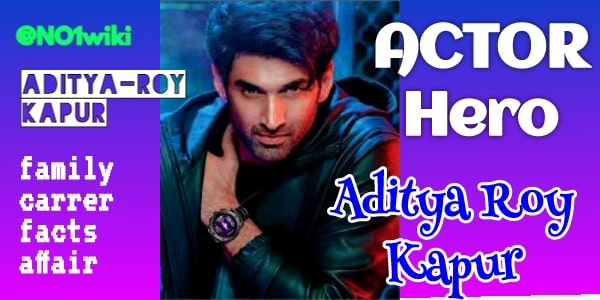 Today, we give you some information about one romantic hero.

He became very famous when he came in the spotlight with Sradha Kapoor in “Aashiqui 2”.

Yes! Aditya Roy Kapur is an Indian actor. He made his Bollywood debut with the 2009 film “London Dreams” but he got his fame in 2013 with the film “Aashiqui 2”.

Aditya Roy Kapur is the youngest brother of Bollywood film producer Siddharth Roy Kapur and actor Kunaal Roy Kapur and he is the brother-in-law of actress Vidya Balan.

His grandfather, Raghupat Roy Kapur, was a film producer.

Kapur is the youngest of the three siblings-his eldest brothers, Siddharth Roy Kapur, was the chief executive officer (CEO) of UTV Motion Pictures and married to the actress, Vidya Balan.

Aditya did his schooling from Mumbai and during his school days, he wants to be a cricketer and also started taking cricket coaching.

But, he dropped his cricket coaching classes when he was in 6th standard.

Aditya also worked as a VJ on Channel V for 5 years and then he got a film and start making his career in Bollywood as an actor.

Aditya was born into a well-established and film-related family.

He is a son of Punjabi father and a Jewish mother.

His father was an army man who met his mother at a bar when he was posted in Kashmir and both made a successful love marriage.

His grandfather, Raghupat Roy Kapur, migrated from Lahore, Pakistan to Mumbai in the 1940s, where he started working in film and later became a film producer.

Aditya Roy Kapur studied in the same school where her mother used to direct school plays.

He wants to become a cricketer but he dropped his cricket coaching classes when he was in his 6th standard.

Prior to entering the film industry, he takes direction classes to improve his Hindi accent to deliver dialogue.

Before working as an actor he works as a VJ for 5 years with Channel V.

Before starting his acting career he wants to release his album for his film “Fitoor”,

he rejected two big projects, but the film didn’t do well at the box-office.

He told he wants his dream girl with a perfect nose and big soulful eyes.

Vidya Balan is his sister-in-law, as she is the wife of his elder brother Siddarth Kapur.

He was not very good at studies and he also failed in his 6th and 11th standard.

“Aashiqui 2” was initially offered to Tiger Shroff, but later it went to Aditya Roy Kapur.